THE LINGUISTIC DIT-MENSION OF SUBJECTIVITY, by Paula Murphy 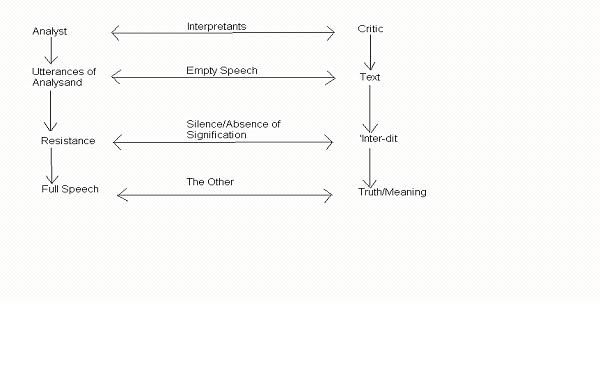 This article seeks to explore the overlapping of theories of language and subjectivity in the writings of French psychoanalyst, Jacques Lacan. Lacan’s particular brand of psychoanalysis takes its inspiration from Sigmund Freud, but Lacan has radicalized the discipline by opening it up to areas like linguistics, anthropology and philosophy. The subject as theorized by Lacan is consequently an individual whose identity is constructed through language itself, which both ensures the individual’s socialization but simultaneously splits the subject by cutting him/her off from the real order of experience.

Considering this background to the development of Lacanian psychoanalytic theory, this article questions anew the relationship between psychoanalysis and literary criticism. It is my contention that the link between the two centers around the crucial position of language within Lacan’s thought. Showing how the purpose and mechanisms of the literary critic parallel those of the analyst within the situation of analysis, I will argue that the objective of both discourses is the uncovering of truth or meaning. However, both the analyst and the critic are also condemned to pursue their interpretations through language, as no metadiscourse is available. Since language in Lacanian psychoanalysis serves to disguise the unconscious, the truth cannot be found within language itself, but beyond it: in the interstices of signification, inter-dit. In this way, it becomes evident that the analysis of any piece of literature or art necessarily involves a response that is dictated primarily not by the words on the page or the paint on the canvas, but a message received by the subject which addresses the unconscious Other.

What makes psychoanalytic theory useful for the analysis of culture? How does the task of the cultural critic equate with that of the psychoanalyst? Many solutions have already been proposed to these questions. Early use of psychoanalysis with literature produced what has come to be known as psycho-biography, with the critic analyzing the author, and the text functioning as the dream or the flow of free association through which the latent neuroses of the author could be uncovered. The theories of Lacan steered psychoanalytic criticism irreversibly onto the path of post-structuralism, yet while critics no longer analysed authors, recognizing that this method ignored the literary aspects of the text, they did analyse literary characters. Recent criticism has begun to question more thoroughly the exact nature of the relationship between the two discourses. Shoshana Felman argues that there is no longer a clear-cut definition between literature and psychoanalysis, and instead of positing the critic as analyst, which has traditionally been the case, she sees the author as analyst, recognizing that even the analyst’s interpretation is not free from the actions of the unconscious, a point which Lacan is at pains to emphasise. Peter Brooks finds an analogy between literature and psychoanalysis in the concept of transference, equating the reader/text with the analyst/analysand: ‘[i]n the transferential situation of reading as in the psychoanalytic transference, the reader must grasp not only what is said but always what the discourse intends, its implications, how it would work on him. He must, in Lacanian terms, ‘refuse the text’s demands in order to listen to its desire’ (qtd. in Kaplan 1990, 6). Brooks moves closer to what I believe to be the fundamental link between the two discourses in his description of the concealed desire of the literary text as parallel to the analysand’s unspoken desire in the situation of analysis. It is precisely this site of silence that is the focus of Barbara Johnson’s essay ‘The Frame of Reference: Poe, Lacan, Derrida’, which critiques Derrida’s reading of Lacan’s analysis of The Purloined Letter.

In ‘Le Facteur de la Vérité’, Derrida criticizes Lacan for his blindness to the functioning of the signifier in the narration, and for making the signifier itself into the narrative’s truth, thereby contradicting his own position on the endless play of the signifier by imposing a fixed meaning on the text. Derrida’s title is a play on the double meaning of the French word facteur, which signifies both postman and factor. The title of the essay reveals its theme, which is the factor of truth, or the delivery of truth in psychoanalysis. Derrida correctly recognizes the importance of this seminar in Lacan’s overall body of work. In the French one-volume version of Ecrits published in 1966, it was placed according to Lacan’s wishes at the beginning of the book, the only piece which is displaced from the chronological sequence. Derrida rightly assumes that this strategic placement of the seminar reveals that it contains themes which consolidate many of Lacan’s theoretical concerns. The Purloined Letter loses some of its meaning in translation: la lettre volée means both to steal and to fly. This refers to both the letter being stolen, as it is several times in Poe’s story, and also to the meaning of the letter which flies off and cannot be pinned down. All of the characters in Poe’s story are linked through their silence when the letter is in their possession: the Queen, the minister and the detective Dupin. If the letter is, as Lacan suggests, ‘synonymous with the original, radical subject’ (Lacan 1988, 196) then it is the subject’s truth which is hidden, trapped in an endless play of signifiers, as ‘[o]nly in the dimension of truth can something be hidden’ (Lacan 1988, 201-2). Both the analyst and the critic seek to uncover the truth or truths of the analyst’s speech and the cultural text respectively, and both attempt to do so through the only medium available to them: language.

Lacan’s now famous summary of Poe’s story, ‘a letter always reaches its destination’ (Lacan 1988, 205) is open to many interpretations, but one of the most important for the purposes of this article is the primacy of the symbolic order in the construction of subjectivity. Each of the characters in Poe’s story is changed in some way through his/her contact with the letter, and in a similar way, the symbolic order in Lacanian psychoanalysis shapes and manipulates subjectivity. If there is a truth that can be accessed therefore, it is a truth beyond the signifier. The last forty years of structuralist and post-structuralist theory have effectively dismantled the idea that any text contains a definable, indisputable truth that is possible to uncover: at least, any truth of authorial intention. The truth that I refer to is not to be found within language. Rather, it is a truth that is situated in an unsignifiable space outside of language. It is not to be found either in the speech of the analysand or on the written page, but is concealed in the interstices of language, in the blank spaces between the words: ‘inter-dit’ (Lacan 1998, 119).

Derrida’s criticisms of the seminar on The Purloined Letter fall into two strands. He argues firstly that Lacan ignores the constructed nature of the narrative, seeing the narrator as a neutral communicant of information, and regarding the story not as a piece of literature, but as an illustrative example with a pre-ordained message that Lacan uses didactically. Further, he argues that Lacan’s analysis conceals the purpose of his argument, which is not just a comment on signification, but is also belies the fundamental structuring function of his theories of sexuality:

What does Dupin know? He knows that finally the letter is found, and knows where it must be found in order to return circularly, adequately to its proper place. This proper place … is the place of castration: woman as the unveiled site of the lack of a penis, as the truth of the phallus, that is of castration. (Derrida 1987, 439).

According to Derrida, the signifier takes the place of the phallus in Lacan’s analysis of the story. Like the letter which is indivisible and indestructible, so too is the phallus in Lacanian psychoanalysis. Derrida states that ‘[f]emininity is the truth of Truth (of) castration, is the best figure of castration, because in the logic of the signifier it has always already been signified’ (Derrida 1987, 442). Like the letter which always reaches its destination, so too the phallus is positioned in Lacanian theory as an originary signifier, master signifier or as Derrida would have it, a transcendental signifier. The dividing line between psychoanalysis and deconstruction falls between the insistence of psychoanalysis on certain fixed points of meaning, and the equal insistence of deconstruction that signification has no fixity.

However, Johnson points out that deconstruction also has a transcendental signifier, which is its insistence on the openness and instability of meaning. Derrida thus copies ‘the gesture of blank-filling for which he is criticizing Lacan’ (qtd. in Kaplan 1990, 7). Moreover, Derrida ignores the context of Lacan’s reading. He is not posturing as a literary critic, but admittedly uses the text for his own purpose, which is the illustration of his theories. The truth that Derrida refers to, contained according to Lacan in the letter, is ‘a truth which is not to be divulged’ (Lacan 1988, 198). The seminar on The Purloined Letter begins this article for the same reason that it begins Lacan’s Ecrits: it contains in a succinct form many central issues of Lacanian psychoanalytic theory: language and subjectivity and the relationship between the two; how the mechanisms of language structure the subject in a literal manner and the interpolations of the two in Lacan’s formulations on language which uncover the dynamics of subjectivity and sexuality. This article will outline Lacan’s theory of language as the cornerstone of subjectivity, in order to propose that the mechanisms of signification in the speech of the analysand and the literary text link the functions of both analyst and critic in an unending and ultimately unfulfilling search for truth and/or meaning.

For Lacan, subjectivity is firmly rooted in language.3 Freud’s discovery of the unconscious, and Lacan’s rereading of the unconscious as a system based on the relation of the subject to signification, has engendered such a radical displacement of twentieth century thought that he compares it to the Copernican revolution (Lacan 1989, 182). The Lacanian subject must be conceptualized outside of the boundaries of traditional Freudian psychoanalytic theory, although Lacan does use Freud as a starting point, stating that his writings on dreams and jokes are ‘a deciphering of pure signifying di-mention [dit-mension]’ (Lacan 1990, 9). In fact, Lacan’s theorizations of the subject are without precedent in psychoanalysis as they are considerably influenced by philosophy. Elisabeth Roudinesco points out that in Freud’s work, the concept of the subject is not crystallized, although he uses the term. Lacan however is,

Lacan’s divergence from Freud at the most basic level is through his theorizations of the subject as subject of language in the most literal sense of the word. He/she is structured through the structures of language. Lacan constantly emphasises the alienation between language and reality and this is echoed in the alienation between the subject and the imago in the mirror phase. Ragland-Sullivan describes this alienation by saying, ‘[l]anguage names things and thus murders them as full presences, creating an alienation between the word and the thing, an alienation that infers gaps or a ternarity into language itself’ (Ragland-Sullivan and Brasher 1991, 4). Language can only stand in for the real thing. It creates reality: ‘[t]he concept… engenders the thing’ (Lacan 1989, 72). In ‘Encore’ Lacan denies that there is any knowledge beyond the signifier, saying ‘[t]here is no such thing as a prediscursive reality. Every reality is founded and defined by a discourse’ (Lacan 1998, 32). He draws on Saussurian linguistics which similarly highlights the gap between language and reality by seeking to prove that the relationship between the signifier and the signified is arbitrary. According to Saussure, it is the combination of the two components of the sign that produces meaning: ‘[a]lthough both the signified and the signifier are purely differential and negative when considered separately, their combination is a positive fact’ (Rice and Waugh 2001, 40).