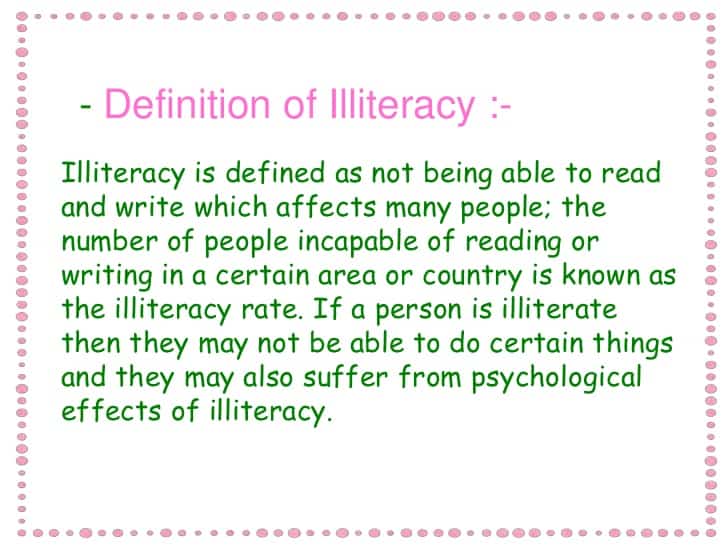 Read the definitions below. Decide which one seems to you to be the best definition of literacy. The definitions are phrased in terms of what a person should be able to do to be considered « literate »:

Is your chosen definition the « best » one? Stop and think before moving on.

As it happens, several of these definitions, or variants of them, have been preferred at some point by some countries as « official » definitions of literacy, at least for reporting data to international agencies. Each country had reasons for its choice. As will be discussed later, there is no one right answer to the question posed. This will become clearer once we discuss the implications of such definitions for assessment.

So, what is literacy?

All definitions presented earlier assume that, to be considered « literate, » a person has to be able to cope with some reading and/or writing tasks. Yet, what level or type of reading and writing skills are needed?

Existing definitions of literacy differ in several ways. For example, some imply that literacy is static or absolute; once you are able to sign your name, or finish a certain grade level, you are considered « literate. » Other definitions (which are now accepted by most educators and organizations) view literacy as dynamic or relative; they assume literacy should be defined only within a certain context of functioning, which may change from one country/culture to another, or over time. Some definitions also include as part of literacy other mental skills, such as numeracy and problem solving.

The bottom line is that literacy is not a simple concept with a single, accepted meaning.

What is illiteracy ? : There is often a confusion between illiteracy, analphabetism, mutism, autism, school (or mental) retardation.

Illiteracy and Topology : Topology don’t care about quantity but only works on quality. This reason makes it easy to work on unconsciousness and language which work the same way.
If you consider Illiteracy through Topology, the results are perfectly coherent and performing. Using only Quality references, makes you discover at once what is the problem : Sexuation !

What is Topology ? : Topology is a part of mathematics. Their is two separate, distinct sections (one on general, point set topology, the other on algebraic topology). Independent topics and applications exist too, like in psychoanalysis and in linguistics…